We teach an eclectic and progressive system of martial arts.

The primary art taught is Shaolin Kenpo infused with concepts and drills to incorporate fitness, boxing, and weapons training.

What is Shaolin Kenpo?

The history of Shaolin Kenpo is rooted in Kenpo Karate. Translated, Karate means "empty hand." Karate is a system of martial arts that dates back to Japan and Okinawa. Kenpo is a Chinese style of Karate founded by Professor William Chow whose family's lineage dates back to the Shaolin Temple. The development of Kenpo Karate was a collaboration of William Chow and James Mitose at the Official Self Defense Club in Honolulu, Hawaii in the 1940's. Distinguished students of Professor Chow included Adriano Emperado (Founder of Kajukenbo), Ed Parker (Founder of American Kenpo) and Ralph Castro (Founder and Great Grandmaster of Shaolin Kenpo). Although Kenpo began as a style of Karate, it evolved into its own system of martial art branching out into two major factions, American Kenpo and Shaolin Kenpo. In 1982, Professor Chow promoted Ralph Castro to 9th Degree Black Belt.

After the death of Professor Chow, as the highest ranked practitioner in the system, Ralph Castro became the Grandmaster of Shaolin Kenpo. Ralph Castro began teaching in the late 1950's in San Francisco, CA. He has taught thousands of men, women and children and has promoted hundreds of black belts throughout the years. His proudest moments were teaching and promoting his seven children. All have achieved high-ranking black belts in the art of Shaolin Kenpo. The primary focus of Shaolin Kenpo is self-defense with an emphasis on speed, power and accuracy. The system is taught through training drills, forms (choreographed techniques) and sparring. 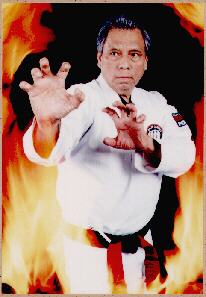 Through the years, Great Grandmaster has received countless awards and commendations including the prestigious, "Lifetime Achievement Award" from the Museum of Martial Arts, and is an esteemed inductee into the Black Belt Hall of Fame.

Ethan enjoys being a student at Shaolin Kenpo. This past year he was promoted to Tiger and the challenges/requirements that come with an orange-white belt have given him added confidence. He talks of having his Black Belt like Grandmaster May Castro-Manner.
Ronda DeMay, Sales Management
more testimonials