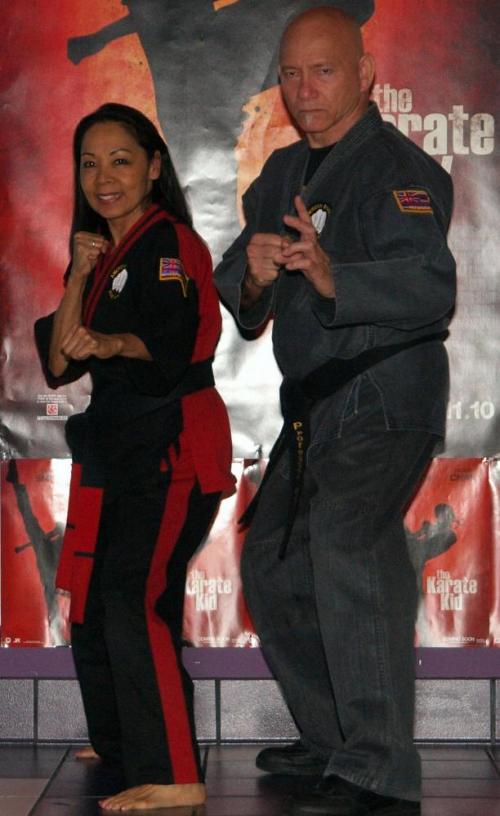 Wil Manner and May Castro-Manner began their martial arts training in San Francisco under the tutelage of Great Grandmaster Ralph Castro, creator of the art of Shaolin Kenpo and founder of the worldwide International Shaolin Kenpo Association.

Professor Wil Manner is a 7th degree black belt with over 40 years of martial arts experience. He began his training in 1966 as a teenager and his development of self-defense skills and self-confidence was instrumental in his decision to make Shaolin Kenpo a lifelong endeavor. Professor Manner began teaching in 1969 as an assistant instructor at Ralph Castro's Shaolin Kenpo Schools. In 1993, he opened the American Shaolin Kenpo Karate Academy in Berkeley, California with his long time friend and fellow black belt colleague, Professor Dwight Scott.

Grandmaster May Castro-Manner is a 10th degree black belt from a martial arts family which includes six sisters and brothers, all who hold high ranks of black belts. They began their Shaolin Kenpo training as early as three years old at their father's martial arts school in San Francisco in the early 1960's. Grandmaster May Castro-Manner's Shaolin Kenpo teaching experience dates back to 1969 at her father's school.

For the past 40 years Professor Manner and Grandmaster Castro-Manner have taught thousands of individuals, specializing in self-defense for children. Since 1994, they have taught martial arts through the City of Antioch's Leisure Services. Most recently they started teaching Shaolin Kenpo in Berkeley to continue the school of their late friend and colleague, Professor Dwight Scott. Four of their six children hold the rank of Black Belt. On July 27, 2009, they opened Champions Martial Arts Academy (formerly American Shaolin Kenpo) on Lone Tree Way in Antioch, California.

Read about the The Art of Shaolin Kenpo

Where can we begin? Grandmaster Castro-Manner, Professor Manner and their entire family are truly a Godsend for us. We love them all so very much. When Isaiah was just 10 years old, we started him in Shaolin Kenpo. He really needed to know he could stand on his own. Under the tutelage, love and direction of the Castro-Manner/Manner family, Isaiah grew tremendously. In December 2007, he received his black belt. His younger brother Jeremiah has become more confident and following along the same path.
Keith & Dianna Brown, Customer Service
more testimonials